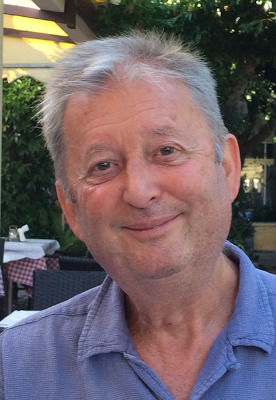 Written by Elizabeth Baines - May 2020

Manchester writer Carl Tighe, who died aged 70 on May 8th 2020, overcame many odds to become the prizewinning author of exceptional fiction, a highly respected academic and an inspirational university teacher.

The eldest of seven children, Carl Tighe was born to an Irish father and a mother of Irish heritage in the Irish immigrant community of Handsworth, Birmingham. He and his siblings suffered poverty and the double prejudice familiar to many second-generation immigrant children: beaten up in the street for their English accents yet discriminated against in their brutal Catholic school for not being ‘true Irish’. As he would tell a reporter in later life, he and his brothers still suffered the scars from being whipped by the nuns.

From an early age Carl wrote stories, which made him further stand out for his ‘weirdness’. Going to university was unheard of – his father had been expecting him to earn money to contribute to the household income, and his secondary school had no tradition of sending pupils to university – but Carl persevered and, enabled by the grant system of the time, went to study English Literature at the University of Wales, Swansea. Once there, however, he fell ill with glandular fever and had to return home and resume his studies later, graduating in 1973. The television writer Neil McKay knew Carl at Swansea, and says of him: ‘Even at that age, his singular vision and independence of thought shone out [yet] he combined a remarkable modesty with a lovely understated humour.’

After graduation, permanent employment evaded him, though this was in part due to his writing ambitions. While holding down a variety of low-paid jobs, from gutting fish to working as a Butlin’s Redcoat, he became active in community theatre in Wales, both as an actor and a scriptwriter. Neil McKay says: ‘He was an excellent actor. I did wonder whether he might go into acting, but then it became more and more clear that he was born to be a writer, and he pursued that path with more determination than I’ve ever seen in anyone else with the same ambition.’

While working as a lavatory attendant in a psychiatric hospital, Carl had a call inviting him to take up a British Council teaching post in Poland. He spent two years there in the mid-70s, initially at Wroclaw University and then at the new University of Gdansk. In 1980 he returned to Poland for a further year, teaching at the Jagiellonian University in Krakow. That was the time of the rise of Solidarity and the fall of communism, a time of extreme hardship and of consequent personal suffering for Carl, with no food in the shops, the heavy weight of government bureaucracy, and an atmosphere of suspicion. As Carl explained in an interview with the Irish Times: ‘I got asthma as a result of the stress and damp and cold and very poor diet. Sometimes I didn’t eat the whole day.’ But this was a time that would further hone Carl’s political sensibility. He was recruited by Solidarity to monitor foreign broadcasts in English about Poland, and was surrounded in the classroom and outside it by spies and police informers. This experience would be a defining one for Carl and would lead to a distinguished career as a self-taught scholar of Eastern European politics and literature, which he pursued alongside his fiction-writing career.

D H Lawrence scholar John Worthen, who also knew Carl from his time in Swansea, says: ‘Carl was one of those people whose political grasp was matched by a searing kind of wit. He could hardly believe what he was seeing and understanding in the world around him: and he could show that devastatingly and always with mordant humour.’

Back to the UK

Returning to Wales in 1981, Carl continued writing for theatre and began broadcasting short stories. His play A Whisper in the Wind would later win the All London Drama Award, and in later years scripts would be commissioned by Contact Theatre and Soho Theatre. Meanwhile he was writing a seminal book on the history of Gdansk which would be published in 1989 and nominated for a Silver PEN Award. In 1988 he moved to Manchester to teach in the Extramural Department of Manchester University. It was in Manchester that Carl would settle. There he met Madeleine Rose with whom he finally found personal stability and happiness, and whom he would later marry.

By the late 80s and early 90s he was gaining a reputation as a writer of exceptional short stories, publishing in magazines like Ambit and The Literary Review. The writer Ailsa Cox and I, editing the Manchester-based short story magazine metropolitan, quickly snapped up the wry, incisive and beautifully observant stories he sent us. In 1992 his first collection, Rejoice!, was published by Cape to literary acclaim and was nominated for the David Higham Award and shortlisted for the Irish Times fiction prize.

However, in the early nineties, with the conglomeration of publishing and the squeezing out of more innovative fiction, along with other writers of literary fiction Carl suffered a setback in his fiction-writing career. His time in Poland had resulted in an autobiographical novel, Burning Worm, which had begun as funny tales he would tell people about his time in Poland (the poet John Tripp told him to get them written down). It is indeed innovative: episodic, like a series of snapshots, ironic and spare and, while funny and extremely entertaining, steeped in an acute political sensibility. Carl spent four years sending it to over 30 publishers. Some didn’t even bother to read it, but one editor wrote back saying that it was the best thing she’d read all year, that she had wanted to publish it, but had been overridden by the management. Finally it was taken up by a tiny Manchester imprint, IMPress, and went on to be shortlisted for the Whitbread Award and to win the Authors’ Club First Novel Award.

Becoming a Professor of Creative Writing

In 1994 Carl completed a PhD on Polish literature and Communism. In 1998 he became a lecturer and then the first UK Professor of Creative Writing at Derby University. Julian Preece, Professor of German at Swansea University, says: ‘Carl Tighe was a unique scholar and adventurous individual. He brought back news from Poland in the last decade of the Cold War. He knew more about Polish literature and culture than anyone in the British university sector, though his academic study was Creative Writing. At the editors’ insistence he sent his scholarly articles on Polish and Central European topics to The Journal of European Studies where they found readers from across the world.’ Carl’s colleague at Derby, novelist Moy McCrory, says of him: ‘While programme leader he took the subject of Creative Writing in new directions. His was a mind of clarity and determination, passionate about the value of language. There was a kindness in him, for above all Carl was a man who understood grief and trouble and the power of writing to save us.’

Carl’s fiction presents a shrewd and wry observation of the world, but it is also the product of a strenuous and beguiling imagination. In his second collection of thematically linked stories, Pax: Variations, which won him Manchester listings journal City Life’s Writer of the Year Award, he portrays the unacknowledged fascism still existing in our society and imagines a world in which the Nazis had won the war. His versatility extended to genre: in 2008 he published a crime novel, Druid’s Hill, and his episodic novel KssssS is an innovative take on science fiction. He was on the advisory board of The Journal of European Studies, and his book The Politics of Literature: Polish Writers and Communism 1945-89 was published in 1998. More recently he published books on Creative Writing and teaching. He retired from Derby in 2015, and for the last five years was able to devote himself entirely to his fiction and his academic writing. Having once been told by his headmaster, ‘No one from this school has ever gone to university, and we’re not going to start with you,’ last year Carl was awarded the high accolade of a Doctorate of Letters by the University of Manchester for his work as a leading authority in the field of the politics and literature of Eastern Europe and his overall contribution to British literature.

Carl Tighe, 1950-2020. He is survived by his wife Madeleine, his stepson Luke, and his four brothers and two sisters.